I was astounded by the quality of a set of stories written by Year 1-2 students at Merrin School (situated in Christchurch; decile 8; a high proportion of ESOL students) and asked the teacher (Jeanne Coker) how they had been motivated. Jeanne talked enthusiastically about the importance of play-based learning in their school and how she had developed Learning /Ako stations to encourage oral and written language. I asked her to tell me more about play-based learning.

Writing generated through ‘play based learning’ in a junior classroom

The following is Jeanne’s explanation as well as some student writing samples that have been created through the play based learning stations, along with photos of some of the stations. I hope you find them as exciting as I did.

“Play based learning successfully underpins our Junior programme at Merrin School. Our Ako Stations are engaging, child centred and interest driven. In a world where everything is so much more instantaneous for our children and with increased time spent on devices, I saw a need to develop an environment to encourage children to use their imaginations and to develop rich language. So I decided to develop some stations which were particularly geared toward extending the imagination.

My Imaginative Stations are hands on and are a fabulous way to promote oral language, cooperative play and encourage children to use their imaginations. They have also been a fabulous motivation for writing. Some of the best writing we have had from our children has been from using the Imaginative Stations as a stimulus. All children, regardless of their level were totally engaged and excited to write their story based on either the Fairyland or the Pirate Island.

The Fairyland and Pirate Island Imaginative Stations are constructed from a wooden cable drum. I sourced these off Trade Me. After sanding them down the painting process began. The majority of the bits and pieces on both centres are second hand. I spent a lot of time in second hand shops seeking out little treasures that would spark the imagination in our children. Trade Me was another great place to find materials. I have secured several of the main features to the cable drums but each centre has lots of moveable elements so the children can create their own stories. The island beside the pirate ship was made from polystyrene from an old boogie board. After cutting it to shape I used papier mache to cover the top before painting and adding a final layer of polyurethane. The sand on pirate island is a combination of the coloured craft sand and fine sawdust. Everything is designed to be picked up and explored.

The play-based learning stations are incorporated into our Year 1/2 Ako Station rotations across the team (4 classrooms) and are in each room for two weeks. As with all our play based Ako Stations, three children at a time can book into using them and the Imaginative Stations are always in hot demand. Some teachers sit them up on tables while other just have them at floor level. Several of my colleagues have said that their children think they have been the best Ako Stations all year! When playing with one of the stations, children are encouraged to decide on and develop a possible adventure that they can share with others. Adventure stories have been modelled to them through the ‘read to’ programme and they are encouraged to think about ‘the best stories they have heard’ or ‘good stories they would like to hear’ when coming up with their own adventures. They are encouraged to think about the audience – either listeners for when they speak, or readers for when they write. They are also told that good stories generally have a beginning-middle-end and they must try and use the best words they can (referred to as WOW words) to build a picture in the audience’s mind. All children are keen to tell their adventures to others and most also want to write about them, generally as individual pieces incorporating the group’s ideas.

It has been rewarding to the see so many tamariki enjoying my play based learning stations. I am keen to make more in the future and have gathered student voice around possible themes. Hot on their wish list is a Volcano Dinosaur Island, a Jungle Station, and an Outer Space World!! 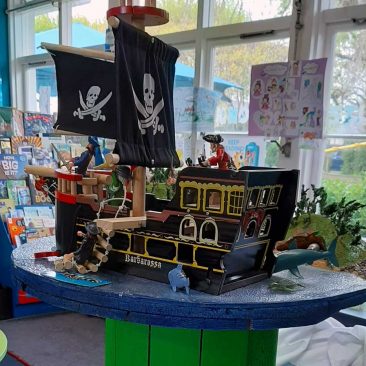 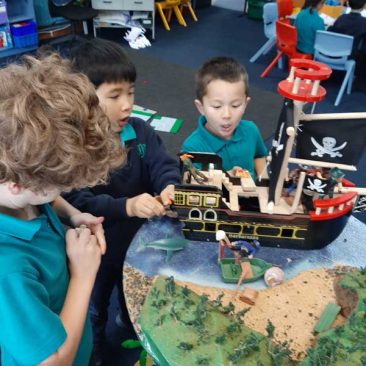 Last week I found myself on an island. It was a very exciting, dry and spooky island.  I saw something sparkling by a bush.  It was golden.  I crept up to it and saw treasure. How do I open it? I shoved it and pulled it and then “hola,” said a voice.  It was a pirate!!! “Hey ho,” he said. “What are you doing with my treasure?” There were a lot of mean looking pirates.  The pirates were arguing about whose treasure it was.  “It’s mine,” “no it’s mine.”  “It’s mine actually,” said Captain Claw with a jerk. “Ha ha,” he said to himself.  “You’re stealing my treasure, the best, most lovely treasure in the world.” The pirates turned around and walked away with the treasure.  I had to do something to get the treasure. What were they going to do with it?  How was I going to get the treasure back?  I collected lots of twigs and sticks and put them in a pile.  I tried to make a boat but it didn’t work.  I tried again and again until it worked.  “Ha ha, it almost didn’t work,” said Captain Claw interrupting in a very rude way.  I went into the water after them.  Trying to paddle fast was very, very hard work, but I had to catch up to the pirates.  I stopped. “Oh no,” I said in a very fast voice.  It wasn’t just me in the boat.  There, staring at me were my parents!  “Hi Mum and Dad,” I said shyly but excitedly. I jumped up to hug my parents.  The pirates suddenly turned around.  My parents said, “wow, who are you?” I smiled at my brave parents. “You’re the best parents I know,” I said.  A ferocious battle broke out between my parents and the pirates.  It kept on going until the pirates surrendered to my parents. They handed over the valuable treasure.  I was exhausted, but we were now rich and we would never have to work again.  Dad could stop work and stay with us forever and ever.  He could stay the whole seven days of every week.

Yesterday I was playing in my garden when suddenly pirates dropped down from the sky!  I was taken up and out of my garden. When I woke up, I was on a pirate ship. The pirate ship’s walls were made of gold.  I was handcuffed.  I heard a loud splash, the pirate ship had splashed down on the surface of the ocean. Finally we got out of the hull, but to my disappointment the pirates told me I was going to have to walk the plank!  I bravely jumped off the plank.  There was a loud splash as I hit the water.  I saw a shark and then … the shark saw me!  I swam back to the ship and climbed up the side. I snatched the pirate’s cutlass off him.  I killed all of the pirates and sailed back to shore.  However it was not my home island.  It was a treasure island.  I walked for hours and hours and finally found an open space.  I lay down to have a rest.  When I woke up I investigated the jungle and I found an old rusty box.  I opened the box and saw rubies and gold!  I sailed back home with the treasure. That was the best day of my life.

Hey me little hearties, do you want to know how I got my golden ship? I found a magical potato chip and it took me to a magical place by boat. But while it was sailing, it crashed and sank down in the dark sea. I managed to stay afloat and drifted to an island. I found a treasure map hidden on the island.   I followed the instructions on the map and suddenly a magnificent big beast appeared.  I tried to get rid of it but I got poisoned.  I stayed on the island for many days. I knew not to stop.  “You have to keep moving,” I quietly told myself. There were poisonous frogs and slime in my way. I didn’t know where to stand.  I tried standing on the frogs, I saw it as a challenge. Back to the frogs, it worked! I got across.  Next I saw flames and was it scary? Yes it was!  I survived the flames by covering my mouth. I kept following the treasure map and eventually found gold! But just then a laser beam tried to get through me. But I am confident and I managed to avoid the laser beam.  Finally I saw a golden ship but I didn’t know how to get back home. So I decided to eat another magical chip and I made it back home.  That is how the story ended, it was a very exciting, and a little bit scary adventure. You can eat a magical chip too … just kidding this book is just a book. 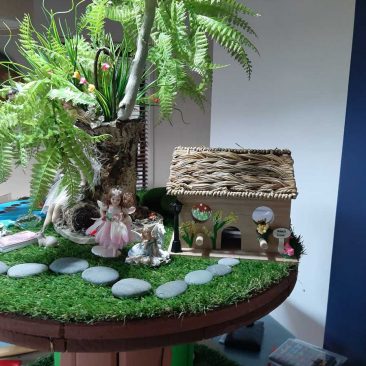 Once upon a time there was a beautiful golden winged fairy. One day the fairy woke up and reminded herself that it was the day of the ball.  She danced around the room like a ballerina. She looked in the mirror, “I’m still in my pyjamas,” she said.  The beautiful fairy went down the stairs and sat on her mushroom chair.  She poured her rainbow juice and tipped her silver cornflakes into a bowl.  Her mum said, “are you full yet?” She rubbed her puku, it was time to get dressed.  She leapt off the mushroom chair and flew to her room.  She got her pyjamas off and her ballgown on. The gown looked like the night sky with a moon and bright stars.  She climbed aboard a golden carriage. The horses trotted all the way to the ball.  After the dance the fairy saw a baby dragon that was hurt, he had crashed into a tree.  The fairy helped the dragon. Suddenly the cute baby dragon turned into a handsome prince.  The golden fairy fell upside down in love! She had babies and lived happily ever after.

A long, long time ago there was a beautiful fairy who lived in a castle surrounded by forest.  But … there was a dragon that lived in the forest.  The fairy didn’t know that the dragon owned the castle.  A few days later the dragon returned to the castle.  The dragon chased the fairy but a queen came and she cast a spell on the dragon.  It turned him into a poisonous frog. The frog leapt up and stole the fairy’s magic wand.  But … accidently, the spell backfired and made the frog disappear. The fairy got her wand back and everyone in fairy land lived happily ever after.

2nd Feb 2021: Hi Murray Your article looks fab, thank you. I hope it can inspire fellow teachers. After a parent delivered me yet another cable drum before the holidays, I was obliged to delve into my creative side again! [T]he farm imaginative centre. What do you think about play-based learning?  Could you replicate this kind of setup in your classroom? Leave a comment below and let us know your thoughts.